The Digital Library contains books which have either been digitised by the Trades House or are available as free downloads on the Internet.   They are available for personal use only and may not be copied with the intention of using them for any commercial purpose, without the written consent of the Trades House.   To apply for written consent, please use the [Contact Us] page.

During Christmas 2019, the Miscellaneous section under the [Glasgow Button] has been re-organised to make it easier to find relevant material.   Slavery and Emancipation, Genealogy and Emigration all have areas of their own now under the [Glasgow Button].   The Miscellaneous section now holds information on Paupers, Railways, Shipping, The Temperance Movement and Demonology and Witchcraft.

Anyone researching members of the Trades House or the Merchants House of Glasgow will at some time or other wish to access the Burgess Rolls and they can be found on this website in the Trades House Section.

Robert Burns Feature
As January is fast approaching and speakers at Burns Suppers will begin to prepare their speeches on the Bard, it was thought that it might be a good idea for the website to have a few books on Burns that are not as readily available elsewhere.

The following Books on Burns can be downloaded for free for private use:
Should Christians Celebrate Burns Birthday? by Rev. Fergus Ferguson 1869
Annual Burns Chronicle and Directory  by the Burns Federation, Kilmarnock (1919)
The World's Memorials of Robert Burns by Edward Goodwillie (1919)
Robert Burns, Scotia's immortal bard : his life and labours  by Rev. Robert Grant (1894)
The Complete Poetical Works Of Robert Burns
The memory of Burns. Brief addresses commemorating the genius of Scotland's illustrious bard  by John D. Ross LL.D.
Robert Burns ~ a birthday address on the life and character of the plowman bard  by Samuel Phelps Leland (1886)
A pilgrimage to the land of Burns; containing anecdotes of the bard, and of the characters he immortalized, with numerous pieces of poetry, original and collected  (1822)

The library was originally established in 1897 following the gift of a large oak bookcase by David MacLean Esq which had belonged to his brother, late Deacon-Convener William MacLean.  Members of the house were invited to contribute books on the topic of guild life and history and the history of Glasgow.  From the beginning the library was a reference library only and this policy has continued. The library keeps to very much the same collecting policy established in 1897 and has a substantial and important collection of books relating to the Trades House and the City.  The original oak bookcase has been replaced by purpose-built shelving which was installed by the 1994 Chain Gang in celebration of 200 years of the Trades Hall.  Many of the original donations were deposited in the Mitchell Library in the 1960s and the books in the Trades House now consist mostly of more recent donations and the extensive collections of the Old Glasgow Club and the Colquhoun Library, the library of the Junior Chamber of Commerce.

The library’s main holdings date from the late 19th and 20th centuries and include histories of individual firms, churches and organisations as well, of course, of the individual crafts.

Lists of the books and periodicals held in the library are available below:

​Trades House Reference Library
On the wall in the library is a copy in oils of the “Four Philosophers” by Peter Paul Rubens.
The chairs used by the Deacons and Visitor of the fourteen Incorporations are also kept in the library. 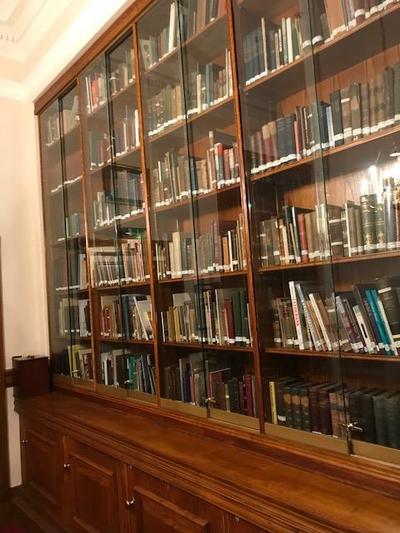 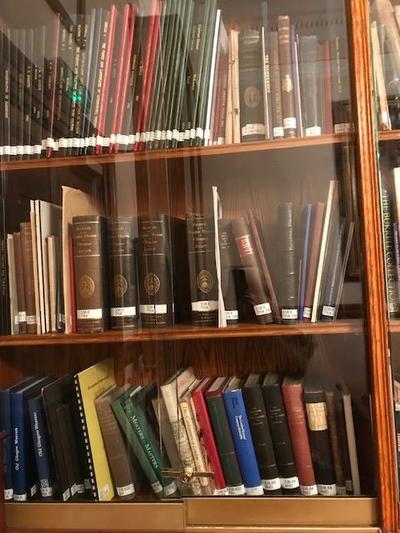 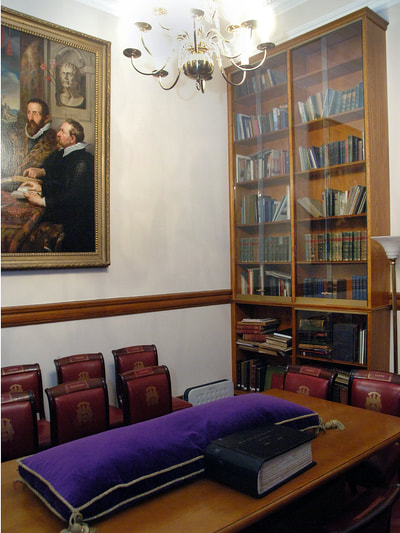 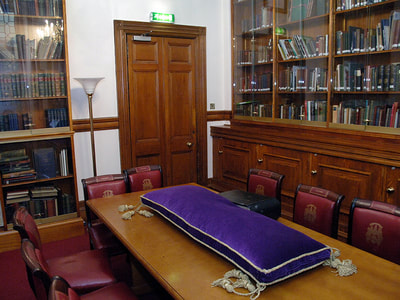